The deus ex machina trope has been explored and adapted more times in science fiction media that we could count. When Doctor Who writer Robert Holmes developed the Nestene Consciousness for “Spearhead from Space”, he paired the concept of a non-corporeal sentient being with the god-in-the-machine premise in the form of the Autons, and the Whovian world would never be the same. Not left to rest on his laurels, however, Holmes was by no means finished, and in the next appearance of the villainous beings, they are assisted by one of the greatest additions the programme has seen. Enter: the Master.

This week, we enjoy the action, adventure, and cat-and-mouse interplay between Doctor and Master in the Third Doctor story, “Terror of the Autons”. Liz Shaw has made an abrupt off-screen departure, the effervescent Josephine Grant emerges as the new companion, and the deadly plastic menace is back once again with the manipulative evil genius of the Master to help in their efforts to overthrow Earth from England outward (as its customary). We delve into the Doctor’s affinity for blowing up electronics, Jo’s prowess as a Level-30 lockpick, the boyish charm of Captain Yates, and the undeniable creepy-cool that is Roger Delgado. 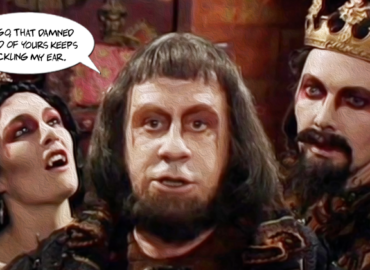 Our Favorites: City of Death

3 Thoughts on “Classic Rewatch: Terror of the Autons”