When you’ve run from all the bogey-men, the ghosts and ghouls, the shadows within the shadows, the killer robots, and the bug-eyed aliens bent on your demise, it’s a reasonable assumption that the next threat to terrify and terrorize us is…rampant galactic capitalism. CURSE YOU, EMPTY SUITS. *fist shake*

This week, we rub furiously at our eyes after a viewing of “Oxygen”, the fifth episode of Series 10. Discussions are had over the respiratory systems of Time Lords, Moffat’s new-found ability to kill at will, Bill going blue, and what Nardole’s organic-to-bionic ratio really is.

“Say Something Nice” — we have to find at least three positive things to say about a randomly chosen episode that comes from the bottom 10% of major Whovian ranking polls. Pollyanna-ism, away! 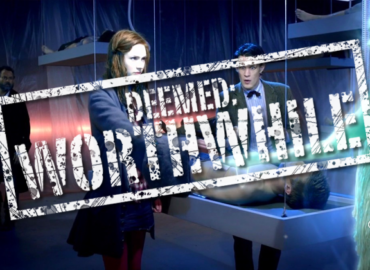