As I reflect on some of the most spirited, or at times emotional discussions I’ve had with Whovians both here on GPR, and among the masses, there always seem to be two topics that at the merest mention, cause my Gallifreyan hearts to shudder, my chest tighten, and leave me scanning the room for an escape pod in case I begin to lose my composure completely. Topic One is, and always will be, the centuries-old symbiosis between Doctor and TARDIS. I…hold on a second. I just need to… *clears throat*

(Apologies. I think I have it under control.)

Topic Two is the role, and the enigma, that is the River Song story. Disjointed, displaced, and disastrous, yet beautiful and wonderful and sad…a brilliant creation by Moffat and company, and as I’ve expressed on the cast recently, SteeMo’s true legacy with DW to date. The idea of two brilliant minds and spirits adjoined through time, but out of sync with time itself, is complex, wonderful and awful. We cheer at their points of intersect, we shatter at their partings, though we know that no ‘goodbye’ between them ever really means the truest form of the word.

To us, the fact that their intelligence and grasp of the complexities of non-linear time allow them to weather these challenges is no consolation — they seem to be able to assess and come to terms with the way their relationship narrows and widens, but we don’t have that advantage. River is a madwoman, but with such passion for her work, her causes, and her beloved, that the madness is not only acceptable, it may be necessary. Could a sane person survive the repercussions of such an existence? She is his counterpart, his compliment, and they are at their best when approaching anything from opposing sides of reason or reaction: she can talk him down from his anger over seemingly futile efforts; she will rouse him to action when he would rather wait and strategize.  Her ability to rattle him with knowledge of events beyond his current timeline does not anger him.  Rather, it sparks his childlike curiosity, and gives us those coat-whirling, lever-cranking moments where we know a fantastic leap into the unknown is about to happen.

She has grit, brilliance, savvy, wit, and a joie de vivre that endears her to the fan base. Her strength and independence are admirable traits as a prominent female character, and Kingston has put an energy behind her “strategic recklessness” that I honestly feel would be impossible to match.

While Jay, Melissa and I have debated whether or not we’ll see her return in Series 8 (listen to the two ‘Name of the Doctor’ episodes for this and other River discussion), the fact remains that for five years, we have been amused, shocked, at times worried, but always wholly entertained by the gun-toting professor with the “space hair”.

Admit it — in the extended sci-fi community, will we ever hear any other voice when reading the word “Spoilers”? 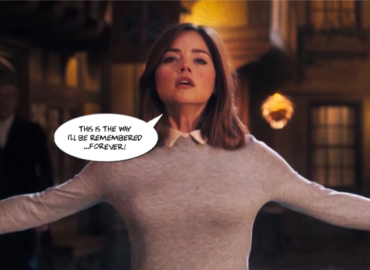