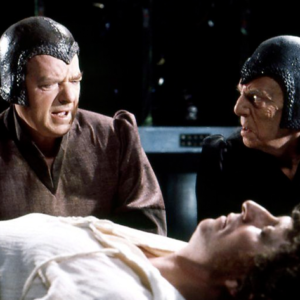 Back to Gallifrey without a companion, we watch the Fourth Doctor deal with his Time Lord kin in ways he couldn’t have anticipated…even if he *is* Prydonian. We all lament the complete lack of a single female actor in the story, but resoundingly appreciate the invaluable additions to a fuller understanding of Time Lord culture. (Or at least bureaucracy.)

Ask the average Earthling on the street to describe an advanced alien civilization, and they might very well picture a strange world of odd colors, outlandish architecture, barely recognizable life forms, and cultural behaviors that we may have little hope of comprehending. Ask a Whovian the same, and you’ll likely touch on a number of those descriptors with some variance (perhaps a higher percentage of humanoid forms), but more or less in the same vein. Now, go a step further, and ask […]