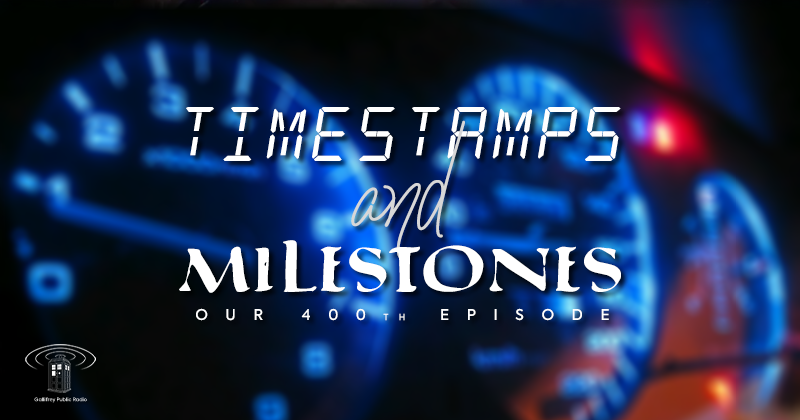 This podcast began a little over eight years ago in the hopes of bringing the most constructive, positive, appreciative aspects of the Doctor Who fandom into the limelight, so that veteran viewers could have something to dive deeper into, newer viewers to discover, and everyone in between to hopefully interact with and enjoy. Despite the fact that we don’t bicker and claw at one another on the air, the world doesn’t seem to mind our contributions, so hey! Four hundred episodes later, we still have things to discuss with the same cheery optimism, which we firmly believe is a testament to the themes and spirit of this program that we love.

We use this notable occasion to do a little reflection on where we’ve come, where we’d like to go in the years to come, and most importantly, to listen in to you, the Gallifrey Public Radio listening public, about what niches and needs our podcast fills in your lives. Thank you to everyone who wrote and called in to convey your well-wishes; we love with with all of both hearts!

As an additional bonus, we are joined once again by Christian Erickson of The Sevateem, last with us in 2018 to discuss the Whovian-inspired music project “The Caves”. This time we get his insight on and explanation of “Resurrection Part Two”, an experiment that offers an alternative score for the Fifth Doctor story “Resurrection of the Daleks (Part Two)”, which accidentally aired in the U.S. in 1984 without score or sound effects. It’s a fascinating 45-minute piece to listen to, and becomes even more so after hearing from the creator. (Both albums are available for digital download at a ‘name your price’ on Bandcamp, with all proceeds going to Doctors Without Borders.)

An Interview with The Sevateem

The Overabundance of the Doctor